Home Entertainment 22 facts that even Potterheads might have missed about Harry Potter and... Some celebrate Diwali, Christmas, or Eid, but ask a Potterhead their definition of a festival and they’ll say June 26th ! Why, you ask? Harry Potter and The Philosopher’s/Sorcerer’s Stone, the first of its series, was published on this day 22 years ago!

Being a Potterhead myself, how could I miss this opportunity of delving deeper into the Harry Potter universe? Here are some facts about Harry Potter and the Philosopher’s Stone that might have missed your eye, but read away to be more of a ‘wiz’ than you already are!

1. J.K. Rowling stopped on a book she was working on to start writing the Harry Potter series. (Sometimes I wonder what that book would have been like if it were finished!)

2. The Philosopher’s Stone was rejected 12 times before it was accepted by Bloomsbury for publication.

3. All of us were introduced to the wizarding world due to Alice, the 8 year old daughter of the then Chief Executive of Bloomsbury, who read the first chapter and wanted more!

4. Joanne Rowling adopted the pen name of J.K. Rowling on the editors’ suggestion as they believed that the book would appeal more to boys than girls but they had a tendency to prefer books by male authors more. So this was done to keep her gender ambiguous.

5. In The Philosopher’s Stone, Harry turns 11 on 31st July, sharing his birthday with J.K. Rowling.

6. On being asked, Rowling had said that her favorite chapter was ‘The Mirror of Erised’.

8. She was also battling depression during this time, but she stuck through with her writing and we are all immensely thankful for that.

9. The book (and the movie) is known as Harry Potter and The Sorcerer’s Stone only in the United States as American publishers believed that the children wouldn’t want to read a book with the word ‘philosopher’ in it.

10. The character that still holds a special place in all our hearts –the boy who lived, was an idea that struck Rowling on train ride from Manchester to London.

11. Harry Potter and The Philosopher’s Stone has won many accolades in the literature arena (and rightly so!). These have included the gold medal of the Nestle Smarties Book Prize 1997 (9-11 category), the British Book Awards Children’s Book of the Year 1997, and the FCBG Children’s Book Award 1997 in the Longer Novel category.

12. It came as a shocker for majority of the readers that Professor Quirell was actually the grey character instead of Snape as everyone suspected, but Rowling had started dropping hints about it since the first time Harry met him in the Leaky Cauldron. 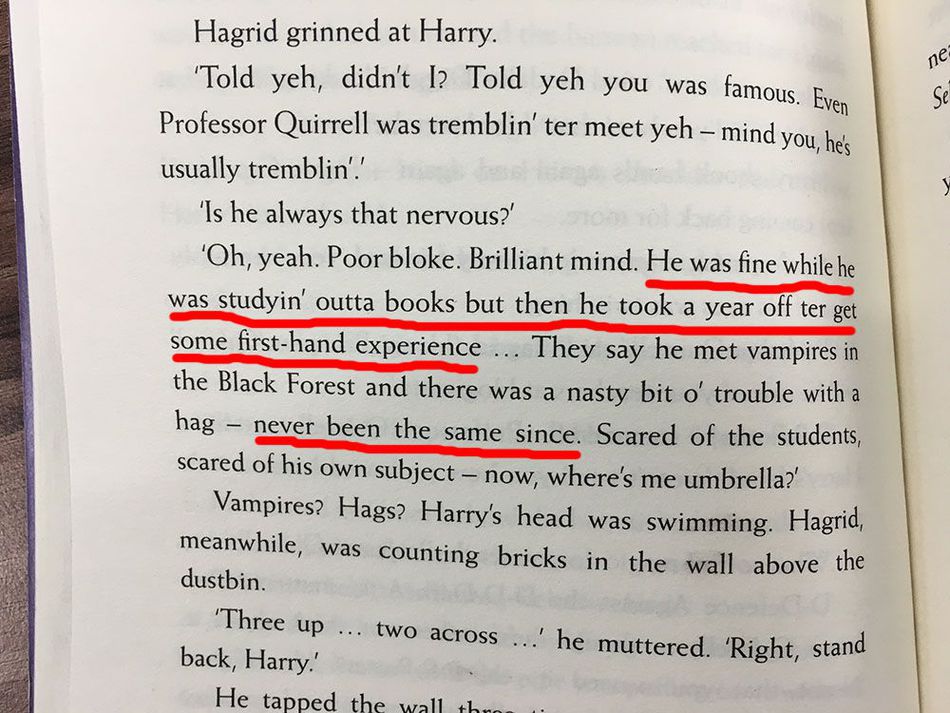 13. People are crazy about first editions and turns out The Philosopher’s Stone has got only 500 of them -350 hardback copies and 150 proof copies.

14. Remember Hagrid’s beloved Fluffy who was actually a giant three-headed dog guarding the trap door? Hagrid mentioned that he had bought Fluffy from a ‘Greek Chappie’. Turns out three-headed dogs are very prominent in Greek mythology; Cerberus being the one that guards the Underworld.

15. Since its publication in 1997, The Philosopher’s Stone has been translated into 70 different languages including Latin!

16. Although we don’t know which, Rowling apparently cut out a line from The Philosopher’s Stone because it conflicted with a plot point in Order Of The Phoenix that hadn’t happened yet.

17. J.K. Rowling was offered the role of Lily Potter in the scene where Harry looks in The Mirror of Erised, but she declined saying that she didn’t see herself playing Lily.

19. In the Oxford English Dictionary 2003, ‘muggle’ was defined as a non-magical person.

20. The inscription around the Mirror of Erised says: “Erised stra ehru oyt ube cafru oyt on wohsi”. Reading the inscription backwards it says, “I show not your face but your heart’s desire.”

22. Most of the books inside Dumbledore’s office are phone books that have been rebound and covered in dust.(WTF!)

I bet you didn’t know a lot of these, right? Except the Ravenclaws, they’ve probably read EVERYTHING! Let us all take this day to thank J.K. Rowling for introducing us to a world we wish was real!