Home Binge Celebrities Here’s how Alex Forrest and her fatal, obsessive love will always be... Check out what makes Glenn Close’s role as Alex Forrest from the movie Fatal Attraction so memorable.

What makes watching movies exciting and interesting is the number of surprises that one gets to experience within 2 hours. This surprise can be the movie plot or the mere excellence of the actors we get to see onscreen. While storyline rules, it needs exceptional talent to give life to all the characters that the writer envisions. The likes of actors like Glenn Close undoubtedly do extraordinarily well when it comes to playing complex character. Even with a list of memorable characters to her name, her character as Alex Forrest doesn’t fail to amuse us to date. 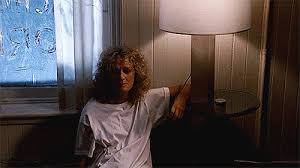 This is another edition of Villain Wednesday, and Alex Forrest is the antagonist in focus today. Her story begins after finding a man who is smart and who shares the same interests as she and makes her go weak in her knees. How can one forget their love for ‘Madame Butterfly’?

What happened in Alex’s past life is not briefly spoken in the film, apart from how her father died. This lack of information makes her an even more interesting character as the movie moves forward.

Dan‘s (played by Michael Douglas) brief meeting at the party with Alex in itself suggested how attracted both were to each other. And even though Dan was all about only having a weekend-long affair with her as his family was away on a vacation, Alex could not just let go. Her falling in love with him felt nothing but human until things escalated from thereon. Alex cutting her wrist trying to commit suicide to not let him go, her stalking Dan, to trying to contact him continuously and eventually at his home phone showed us how troubled she was. It is when she abducts Dan’s kid Ellen and tries killing Beth his wife, that we are introduced with her dark side.

Glenn Close, is the actress who has played some iconic roles such as Marquise de Merteuil in Dangerous Liaisons, Dr. Caroline Caldwell in The Girl With All the Gifts and Cruella De Vil in the 1996 live adaptation of 101 Dalmatians. Glenn’s roles onscreen have always been very peculiar and different. Her choices gave her a chance to transform into the best version of herself as an actor. She was nominated for the Academy Award for Best Supporting Actress. Whereas Fatal Attraction (1987) and Dangerous Liaisons (1988) were able to establish her as a leading lady in Hollywood. Both the movies earned her nominations for the Academy Award for Best Actress.

Here are some of the iconic dialogues by Alex Forrest:

“We were attracted to each other at the party, that was obvious! You’re on your own for the night, that’s also obvious… we’re two adults.”

“You’re here with a strange girl being a naughty boy.”

“I had a wonderful time last night. I’d like to see you again. Is that so terrible?”

“Please don’t justify yourself, it’s pathetic. You’d tell me to fuck off, I’d have more respect for you”

“Don’t you ever pity me, you smug bastard.”

“Well, what am I supposed to do? You won’t answer my calls, you change your number. I mean, I’m not gonna be ignored, Dan!”

Also Read: Adam Sutler from V for Vendetta gave us one of the most intense villains ever!