Check out how Digambaran from the Malayalam movie Anandabhadram aced his role and made it to our list of iconic villains.

Movies based on dark fantasy is both easy and hard to become a crowd favourite. If not delivered rationally, it is hard to make these movies based on mythic and supernatural powers a success. It is only through proper story-line and characterization that these movies go on to be known and remembered by movie lovers. Santosh Shivan‘s Malayalam dark-fantasy movie Anandabhadram is a successful example that also gave audiences their favourite villain Digambaran. 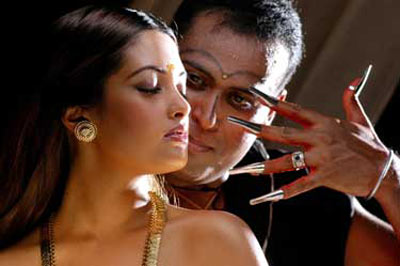 Just as his name sounds, Digambaran is a scary mystery that no one attempts to solve. A man who is proficient in martial arts he has exceptionally mastered the art of patience. He has dedicated his life to becoming more efficient in black magic and thereby getting his wishes fulfilled. What happens within the four walls of his house has always been a mystery to the people of his town and he likes it that way. For a man who has people scared, he does everything to save the girl who he has a crush on, which BTW comes as a surprise for anyone who has watched the movie. His evilness is so unmatched that it would not be wrong to say he carries the whole movie on his shoulder. Also, Digambaran might be one among the few villains who has a beautiful song pictured on him. FYI, Thira Nurayum has to be one of Santhosh Shivan’s best works.

Manoj K Jayan, the actor who played the character has graced the screen with a number of portrayals that made him lovable. His polished acting and dialogue delivery leaves every person glued to the screen. Son of the famous Carnatic musician and Padma Shri awardee, K. G. Jayan and V. K. Sarojini, a teacher, Manoj has clearly made his own mark in the movie industry. His role as Digambaran earned him Film Critics Award (Best Actor), Amritha Award (Second Best Actor) and Sathyan Smaraka Award (Best Supporting Actor).

Here are some of the iconic dialogues by Digambaran:

“Ente sherikal ente matram sherikal aanu. Aareyum tadasam nilkkan njan anuvadhikkilla. Ente priyachangathi aaya nee ayal polum”
(My rights are only my rights. I would not allow anybody to question them. Even if it’s you, my closest friend)