Home Lifestyle Sports & Games Twitter war between Veena Malik and Sania Mirza because of a video... After facing a big defeat on Sunday in the Cricket World Cup’19, Pakistan team had to encounter a lot of backlash. The fans were not at all sympathetic and went all in when it came to making memes and showing their disappointment. But another story is gaining fire amidst this –the Veena Malik spat with Sania Mirza.

Apparently, a Pakistani user uploaded a video on Twitter saying that he spotted Shoaib Malik, along with other Pak players smoking sheesha hours before the most awaited match. Sania Mirza is also seen with her husband. Pakistani actress and model Veena Malik tweeted to this by saying Sania should know that a sheesha place is hazardous for a kid and that being an athlete, she should know eating junk is not good for her husband.

Shoaib Malik with other team players was smoking Sheesha on Wilmslow Road, Manchester, on Sunday morning – 7 hours before the start of match against India ?#IndiaVsPakistan #PAKvsIND @TheRealPCB @hansbadvi pic.twitter.com/o8MekodEc0

Sania, I am actually so worried for the kid. You guys took him to a sheesha place isn't it Hazardious? Also as far as I know Archie's is all about junk food which isn't good for athletes/Boys. You must know well as you are mother and athlete yourself? https://t.co/RRhaDfggus

Sania, who has always been known for her devil may care attitude, replied saying that she did not take her kid and that she’s not Pakistan team’s dietician or mother.

Okay so this Happened. First, she tweeted then deleted that tweet right away and blocked me. I mentioned my concerns in a very civilised, calm & composed manner. It could have been a healthy debate. pic.twitter.com/aw6C36xI3o

Great to hear that u didn't took ur kid their. Oh did I mentioned you are a dietician or mother of the Pak team? I said u are an athlete and u must know how much fitness is important for athletes.Also aren't u a wife of cricketer? U should take care of his wellbeing.Isn't it? https://t.co/zZKS3r0xSk

This fueled and started off a rather salty argument between the two. While Sania took digs at Veena regarding the ‘indecent’ magazine cover she was on and blocked her, Veena talked about how that image was morphed and that she could talk about Mirza’s past controversies as well.

Have some guts & don't delete ur tweets.Fortunately the technology has progressed so much that people can't deny their acts.Oh the magazine's cover u mentioned had morphed images.Also I can bringup all the controversies U have ever had bt I would rather not divert the discusion. pic.twitter.com/8qednFvEBz

To give you context, this is the infamous magazine cover that is being talked about: 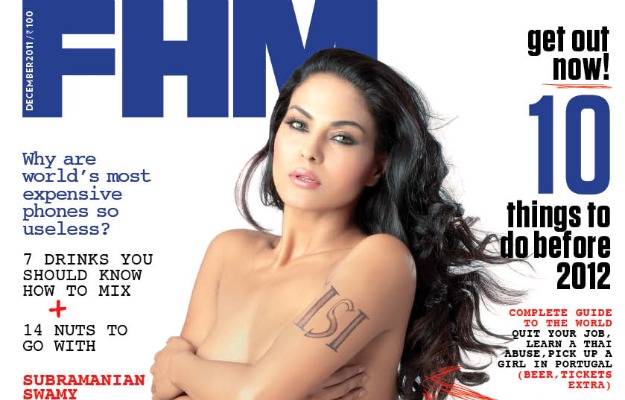 Also your tweet shows that me being worried for my country and cricket team has triggered you so much. Thank you for opening up to the world and showing your true colors!
Much Love Veena Malik ?✨

Dearest Bhabhi,
Attacking someone personally and reaching new heights of being low will not take you anywhere.
Love,
Veena Malik. https://t.co/eaB1ua1ZPR

Please don't be hypocrites.Just because you think i'm controversial i'm wrong. No, I can be opinionated as any other human being and I can be right too. I am heartbroken and hurt. Leave the past behind and move forward. ??

While all this was on, Shoaib Malik tweeted that the media should be held accountable for what it does; that the video was of 13th June and not the 15th.

When will Pak media be accountable for their credibility by our courts?!

Having served my country for +20 years in Intl Cricket, it’s sad that I have to clarify things related to my personal life. The videos are from 13th June and not 15th

On behalf of all athletes I would like to request media and people to maintain respect levels in regards to our families, who should not be dragged into petty discussions at will. It’s not a nice thing to do

We don’t know which side is right here and which isn’t, or if there even is a right side to all this –but what can be seen clearly is that Pakistan team would really have to buckle up for upcoming matches to restore the faith of their fans and country.